A couple weeks ago, I posted about my daughter’s results in the Tornado Suit.  Then she blogged about how she is doing, from her perspective.  This week, I want to cover the fundamentals of the different exercises that she is doing so far.

1.  Pettibon/ARC 3D weights in her Tornado Suit.  She puts on her Tornado Suit, then straps on her head weights and shoulder weights – she either stands, or walks around.  At Dr. Morningstar’s office, he has her walk on a treadmill, because the movement of the leg actually emphasizes the de-rotation on her spine.  She has worked up to wearing her weights for 10 minutes, twice a day, and this is the point we will stay for a while.  The weights help re-educate the nervous system to make her body naturally align.  As I’ve said in previous posts, this method has changed the shape of my neck (for the better).  See the Post Here.  Read more about the ARC3D approach: Dr. Morningstar’s Book

1.  Torso rotations – in the office, we use a weight machine sort of like this one, but she rotates her upper body and not her lower body.  She does 6 sets of rotations with 10 pounds each.  At home, we’ve set up a weight with a cable to her ladder apparatus (pictured below).  She sits in front of it on an exercise ball chair and does one side at a time, pulling on the chord and rotating her pulling arm in front of her.

2.  Grab and pulls – she sits in front of her Schroth ladder apparatus on an exercise ball and reaches her left hand as high up as possible and her right hand low (and underhand, so fingers are facing up) and she pulls on the bars as hard as she can for 10 seconds. She does 10 of these with a pause in between each.  This helps to de-rotate her spine and build the corresponding muscles.

3.  Breathing over the ball – she lays on an exercise ball, knees on the floor, and takes 10 slow, deep breaths, trying to breathe ONLY into her left thoracic (mid-back).  Her hump is on the right thoracic, so this breathing helps her to de-rotate.  We can even take a Scoliometer (search your smartphone for Scoliometer aps) and put it on her back to see how many degrees she de-rotates.  Once she gets good at this over the ball (it is VERY difficult), she will be able to do it standing, and for more prolonged periods.  The hope is that she will train her body to de-rotate when she breathes.

For now, that is it, but it is still a lot for an 11-year-old.  She has handled it all like a champ.  Every two weeks, I make her a chart for morning and evening.  She can check off every time she does her exercises.  And, of course, we always pick one evening a week to blow off the exercises!  We can’t be perfect, after all! 🙂  Next week, I take my daughter on a special trip to see relatives in Seattle.  She is excited to blow off her exercises for 5 entire days!  Of course, she will be wearing her Cheneau brace all the time, as usual.  But, it will seem like a holiday!

Hi, I’m Cindy, Tina’s daughter, and I’m undergoing some new therapy for my back. I have to do four different exercises, so far. They’re pretty hard. Some involve breathing, some involve the Tornado Suit, and some involve weights. I’ve had to do harder exercises because my curve has gotten worse, and we are trying to prevent surgery. They can sometimes be a pain to do, but I know it’s for a good cause, so I tough it out. Sometimes I get really discouraged because I have homework, dance, or chores on top of my exercises, or it’s a late night. I am also a little jealous, sometimes, because my brother’s curve is so small. It is always nice to have friends and family who understand what I’m going through, because I think encouragement is very important. It gives you the courage to keep going. To any others who have exercises, I like to get them done all at once because then I can do something fun afterwards, like play a game or hang out with my friends. Try to do something fun every day, so you don’t get discouraged too much, whether it’s to draw a picture, go outside, or even just to play with the cat a little bit. Stay happy!

Hi everyone.  I am happy to be back blogging after a nice break – my much younger brother came to visit us, on hiatus from the Navy, so we had a lot of fun with him.  I also want to thank my wonderful readers for being so loyal over the past year – my year-end summary showed that we had over 10,000 views, from over 90 countries!  It was a lot of fun to click on the map and see how many viewers came from which countries.

We have also been working hard with my daughter’s new, ramped-up therapy schedule with Dr. Morningstar.  She has surprised me with how diligently and responsibly she has been doing her exercises.  Honestly, I didn’t imagine, in my wildest dreams, that she would be so fantastic about it – especially during the holidays.  Her twice-daily regimen is now becoming part of her routine.  I make her a chart every other week, outlining what she needs to do every day (we add a bit more each week, not wanting to overwhelm her), and she puts a smiley face if she does them and a frowny face if she does not (this was her method – I figured checkmarks would work, too) 🙂  Anyway, I even had to convince her that it is OKAY to allow herself to miss either one morning or one evening session a week, because we can’t do everything perfect in life.  We need to allow room for life just “happening”.  So, she’s become remarkably diligent, and I am thrilled.  I will go more into her workout/therapy schedule next week – all the exercises are given to us by Dr. Morningstar.  We visit him every-other-week and she gets one or two new things to accomplish.

What I wanted to write about mostly, though, is our first visit with Dr. Morningstar after our trip to Virginia to see Luke and get our new braces made.  We’ve been seeing Dr. Morningstar for years, but we “started fresh” at this appointment.  We took a series of x-rays (with his wonderful digital x-ray machine) just to see how she was responding to the various treatments.  Now, I already posted that Dr. Morningstar doesn’t give much credence to the Cobb Angle, but it is the only basic unit of measure we have to work with at this point, so it gives  a good jumping off point.  The following picture shows a side-by-side of three of my daughter’s x-rays.  Before I say anything more, however, I feel it is important to emphasize that I not only have my daughter’s permission to publish her x-rays, but that she adamantly encouraged me to do so.  She said that she wants to do whatever she can to help others, through the use of her story, so she told me to use the photos.  On a side note, she may also start blogging here in the near future, as well.  It will be nice to finally get her perspective on things, first-hand.  But, back to the subject at hand.  You will notice that we are dealing with 3 curves – one in her cervical (neck) region, one in her Thoracic (mid back), and one in her lumbar (lower back).  The left photo segment is what we had taken at the last visit to the Orthopedic surgeon, which was taken after 24 hours out-of-brace.  This represents her curve without any corrective devices.  There are no angles drawn on because the Doctor simply told us that it looked “the same” as the last x-ray, and was approximately 55-58 degrees at the fullest (thoracic) curve.  On our trip to Virginia, Luke measured the largest curve (thoracic) at 69.  As Dr. Morningstar indicated in his comments that I relayed in my previous post, it is common to get very different readings from different people.  Luke measured the curve on a computer, with software, so I feel that he is probably pretty accurate, and is comparable to the accuracy of Dr. Morningstar’s  computer readings.   The middle photo is one with her in her Cheneau brace, with her Pettibon/ARC 3D weights on.  (Incidentally, we also took an x-ray of her in just her Cheneau brace, and there was not significant correction in-brace.  Don’t jump to the conclusion that this means that the Cheneau brace does not work, because that is far from the truth.  For my son, because we caught his curves early, we have had tremendous success.  My daughter’s curves are very rigid and very advanced, so I credit the Cheneau brace with maintaining her curve and keeping her from any kind of early surgical intervention.  I have always said that I highly recommend this brace and Luke at Orthotic Solutions).  Now that I have that little disclaimer taken care of, I will continue with my explanations.  You will notice that the middle photo indicates very little correction – her curves are stubborn, to be sure!  The far right photo shows her in the Tornado Suit, with no weights.  You will see a correction in the cervical section, of a few degrees.  Not much, but for a curve that doesn’t seem to respond to ANYTHING – it’s a start.  I look forward to seeing how she checks out in several months, after her ramped-up therapy routine.  I will also mention that the x-ray cannot depict her improvement in posture and rotation, which she gets BOTH in her Cheneau and Tornado Suit.  Currently, we are only using the Tornado Suit for her times in her weights and, soon, when she will be doing her therapy.  All other times, she wears her Cheneau brace.  As you can see, though, her correction in the Tornado Suit is comparable to that in the Cheneau, which shows that the Tornado Suit has a lot of promise, especially for people who can’t, or choose not to, go the hard-bracing route.   The first major studies on the Tornado Suit are coming out very soon, so stay tune because you KNOW I will be blogging about those results soon after they come out. 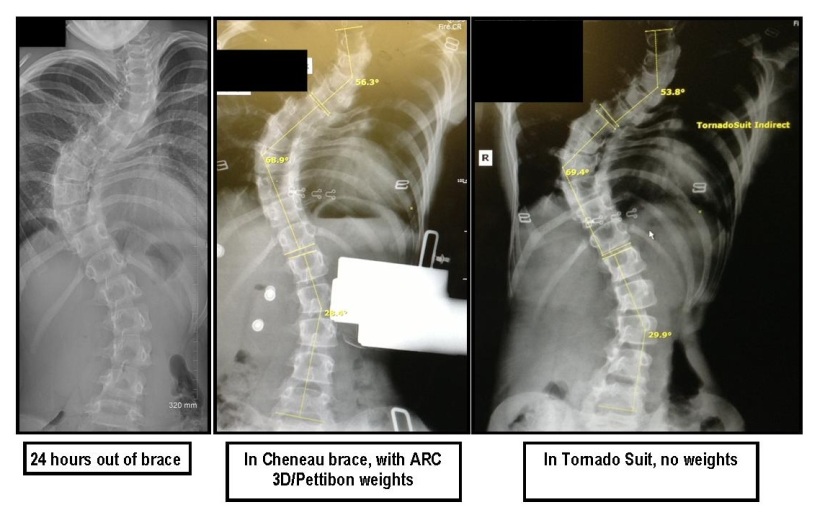 Chapters of the Adventure